Cove Gap was the western edge of civilization: a place alive with the sights and sounds of a center of commerce. Though the surrounding Allegheny Mountains provided a formidable barrier to those seeking a way west, the gap cut through two of three parallel mountains and made a westward journey a little easier. During those days, anyone seeking a route west passed through this gap.

James Buchanan State Park is the President's birthplace. Though quiet and solitude now reign, the spirit of this place would have been much different on April 23, 1791, the day of James Buchanan's birth.

In 1789, James Buchanan's father bought this place, first called Tom's Trading Place, in its heyday, complete with cabins, barns, stables, storehouses, store and orchard. He renamed it Stony Batter after the Buchanan home in northern Ireland and continued to operate the business until moving it to nearby Mercersburg when young James reached the age of six. 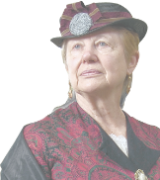