Basil Biggs was born in Maryland in 1819. His mother died when he was four, leaving Biggs to be hired out to work for others. Although his mother left him the substantial sum of $400 with which to be educated, it was later stated that his only education was “with his hands.” He married Mary Jackson in the 1840s, and they moved their family to Pennsylvania in the 1850s so that their five children could receive an education.  Biggs settled in Gettysburg in 1858. He was known as a veterinarian and reportedly used his home to conceal freedom seekers during the day. His home was used as a stop on the Underground Railroad.

In 1863, Biggs was working as a veterinarian and a tenant farmer, when the threat of Confederate invasion of Pennsylvania forced him to take his family east to Wrightsville. When they returned, they found the farm in ruins as it had become part of the Gettysburg Battlefield, and the Confederate army had set up a field hospital on part of the farm. The entire property was covered with items dropped by men of both armies. Additionally, forty-five dead Confederates were buried on the farm. Biggs later filed a claim for the loss of eight cows, seven steers, ten hogs, six beds, sixteen chairs, ninety-two acres of destroyed crops, eight tons of hay, ten crocks of apple butter, two sets of dishes, and jellies.

Burying the thousands of soldiers lying dead in towns and hillsides across south-central Pennsylvania was an enormous task, and most of the bodies ended up in shallow mass graves. Soon enough, the challenge of proper burial dovetailed with the Union's desire to honor the fallen of this long-awaited victory.  Thus, after the battle, Basil Biggs was subcontracted by the Government to exhume over 3,500 Union soldiers and have them reburied in the Gettysburg National Cemetery. Biggs could haul nine at a time. The bodies were removed from various cemeteries located around Adams, Franklin and York counties and transported to Gettysburg for proper burial, many in unmarked graves.

Biggs earned a considerable amount of money in the exhumation and reburial of bodies, he used that money to purchase a farm where he continued to live his life and contribute to the community. He was an active member of the Sons of Goodwill, which worked to create a cemetery for the town’s Black Civil War veterans were he was also buried after his death. Biggs died on June 6, 1906 and lies in the Lincoln Cemetery in Gettysburg.

If you're enjoying the story of Basil Biggs,
why not check out the roadtrip inspired by his story. 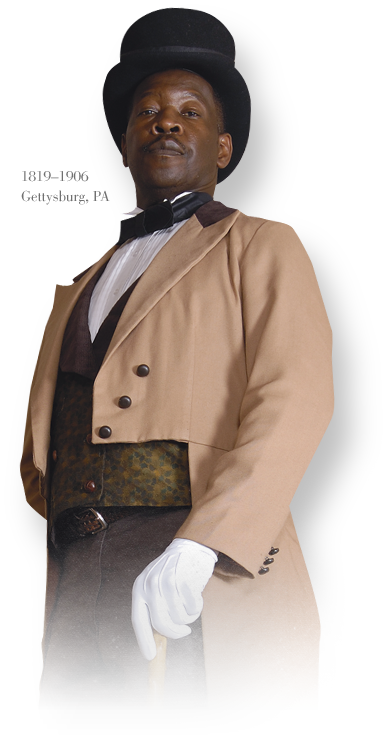